On Wednesday 3rd October in the afternoon, a gala evening was held in Aureole, one of the highest restaurants in the Czech Republic, to celebrate the 25th anniversary of the Professionals.

A unique evening was held in the spirit of the famous series The Professionals with heroes Bodie, Doyle and their senior chief Cowley and was attended by about 180 guests including partners and friends of the company.

Excellent Dalibor Gondík played the role of seasoned master of ceremonies. The evening started with a humorous story whose history was to rewrite the map of the real estate market in the Czech Republic. The speech was about the executives, the spouses Thomas Duda and Viktoria Dudova and their former and current employees who were introduced as Professionals in all respects.

The theme of the series of Professionals was spread across the “action” evening. Beginning in the private elevator of Aureole, the guests “Joined the action”, with the words “You’re going with us”, using their fingerprint, they transformed into the role of main allies of the Professionals. Guests could immortalize their presence at the crime scene directly in front of the green screen using props playing the roles of agents from the special department of the CI5, the Interpol allies and FBI agents, as well as all kinds of bad guys. The evidence in the form of the highest quality photographs were taken by the guests for the file of evidence.

The distinctive space was dedicated to the employees of the Professionals team. “The company can only be as good as its employees. Professionals has been at the top of the field for 25 years and thanks to our team, we believe that it will not be different in the years to come, “said Tomáš Duda, CEO of Professionals Ltd. in his speech during the opening. The words of gratitude were also directed to the business partners whom Tomáš Duda said: “For 25 years, you are our main allies, our business partners, for whom we have the honor to look for optimal solutions according to our best consciousness and conscience. Thanks to your trust, we have been in the market for 25 years. “

The whole atmosphere of the evening illustrated the unique space of a restaurant located at a dizzying height, on the 27th floor with a panoramic view of Prague. With a glass of good wine, at sunset, guests could enjoy a unique culinary experience in the form of delicious dishes from chef George Kral and his top team. The party brought Bara Zmeková’s musical performance and the Prague Jazz Swing Quartet joined by Nina Marinova’s violin. 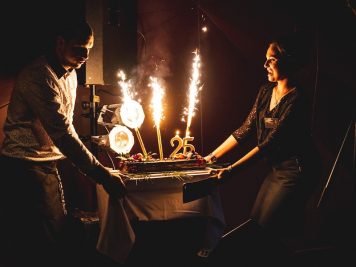 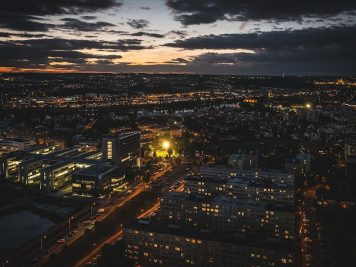 Excellent Dalibor Gondík as a seasoned master of ceremonies 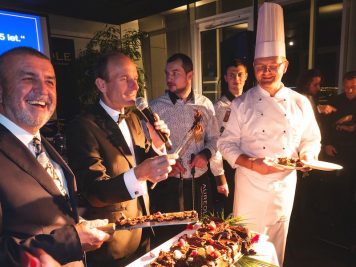 from the left Petr Černovský Associate Director Professionals, Ing. Bronislav Havel – Chairman of the Board Amulle