The University of New York in Prague, the leading English-language private higher education institution in the Czech Republic, is proud to announce three new major partners at today’s press conference on the UNYP Campus. These partnerships – with the Czech Olympic team, Rytíři Kladno and the Czech Economics Olympiad, are set to continue the university’s long-term project of forming high-level Czech sports and academic partnerships, serving to strengthen the message that tomorrow’s leaders need a healthy mind in a healthy body. UNYP is keen to show young athletes that there are many career opportunities in competitive sports beyond direct athletic participation, and which can be pursued as a viable future when their competition days are at an end.

“The key to success is to develop a healthy mind and a healthy body equally. Since 1998, we have strived to complement the top-quality academic education that we give our students with free gym memberships, free swimming pool access, and our own UNYP Blazers sports teams, so today’s announcement should come as no surprise,” says UNYP’s General Manager, Sotiris Foutsis.

Last year, UNYP launched a Business Administration degree with a concentration in Sports Management, as a culmination of its successful four-year partnership with Sparta Floorball. Even outside the world of floorball, the university has seen keen interest among athletes who wish to study a more business-related sports program than a traditional science-based Sports Management degree. As a result, UNYP will take another step forward this year with these new partnerships:

UNYP will become the Official Education Supplier of the Czech Olympic Team for the period from January 2022 through the end of 2026. UNYP will operate as the main partner of the Czech Team’s Dual Career project, which helps prepare current and former athletes for life after their professional career in competitive athletics. UNYP is proud to have been chosen by the National Olympic Committee to develop tomorrow’s sports leaders, as well as ambassadors of the Czech Republic around the world.

Together with Jaromír Jágr and his team Rytíři Kladno, UNYP shares one vision; to support the youth and disadvantaged of the Czech Republic. It was in this shared vision that the partnership was developed. The University is proud to support Rytíři Kladno as they rebuild the team and the stadium. We hope our cooperation will spark a new generation of elite Czech hockey players who can excel both on and off the rink.

The partnership of UNYP and the Economics Olympiad promises to increase the economic literacy of Czech youth. UNYP believes that this is crucial to the overall success of the Czech Republic in its long-term growth as a business leader in Europe. Teaching economic values and skills from an early age will produce young men and women who have a more concrete understanding of money and investment for their adulthood, making fewer mistakes along the way.

The press conference finished with the unveiling of a new artwork by David Strauzz. David Strauzz is a progressive and highly respected street artist, who has been invited to create his work in public spaces around the Czech Republic. The work was specifically created for UNYP to highlight leaders who deserve further recognition for the tremendous personal sacrifices that they have made for Czech freedoms. His work at UNYP represents the deeper meaning of freedom in speech and education. 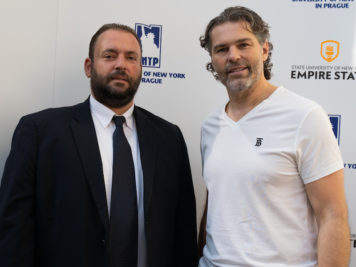 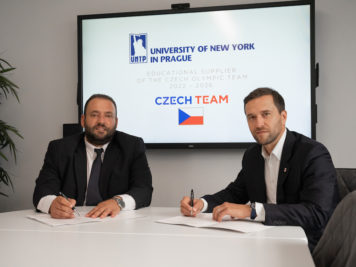 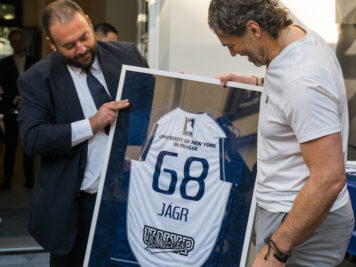 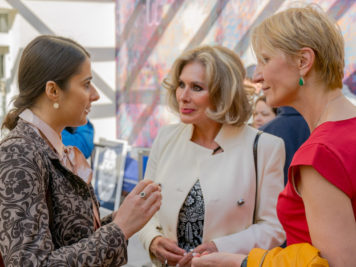 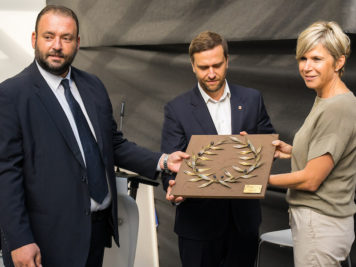 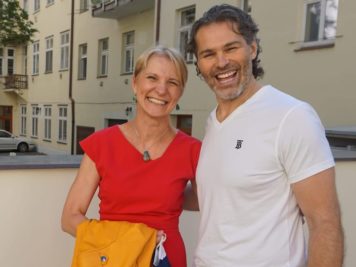 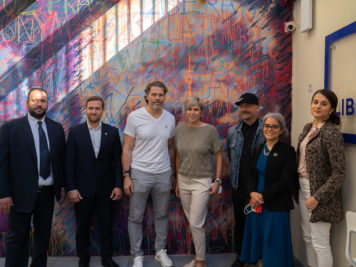 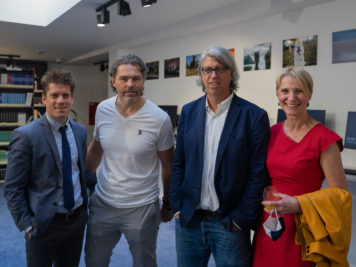 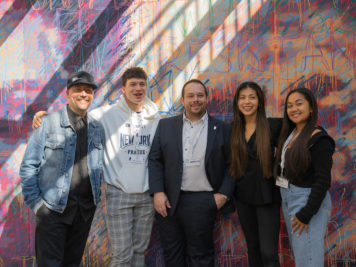 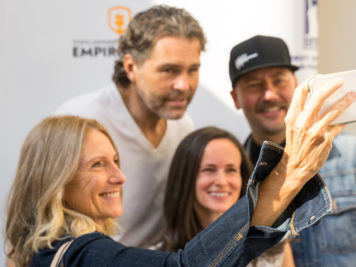