The fact that the opening of the new synagogue was attended by many VIPs demonstrates that the new Rabbi David Maxa, together with the community, has managed to make his mark as the representative of Progressive Judaism in the country. H.E. Daniel Meron, the Ambassador of the State of Israel and H.E. Hans-Peter Hinrichsen, the Deputy Ambassador of the Federal Republic of Germany, Dr. Robert Řehák, Special Envoy for Holocaust, Interfaith Dialogue and Freedom of Religion from the Ministry of Foreign Affairs, Professor Tomáš Zima, Rector of Charles University (the oldest and the most prestigious in the country founded in 1347), Dr. Tomáš Kraus, the Executive Director of the Federation of the Jewish Communities in the Czech Republic and Ing. Mariana Čapková, serving as a Prague Municipal Council representative, over 70 members and supporters of Ec chajim, the Jewish Liberal Union and the Lauder Schools of Prague were present; this number would be much higher had the epidemiological situation allowed.  The Czech lands have been historically connected to Progressive Judaism and it is both returning to these roots as well as forming a pathway for the future, that Ec chajim has got own new premises, which will allow not only regular services but also education and community activities. In addition to Prague, Rabbi David Maxa will continue to serve in the communities of Liberec and Děčín. 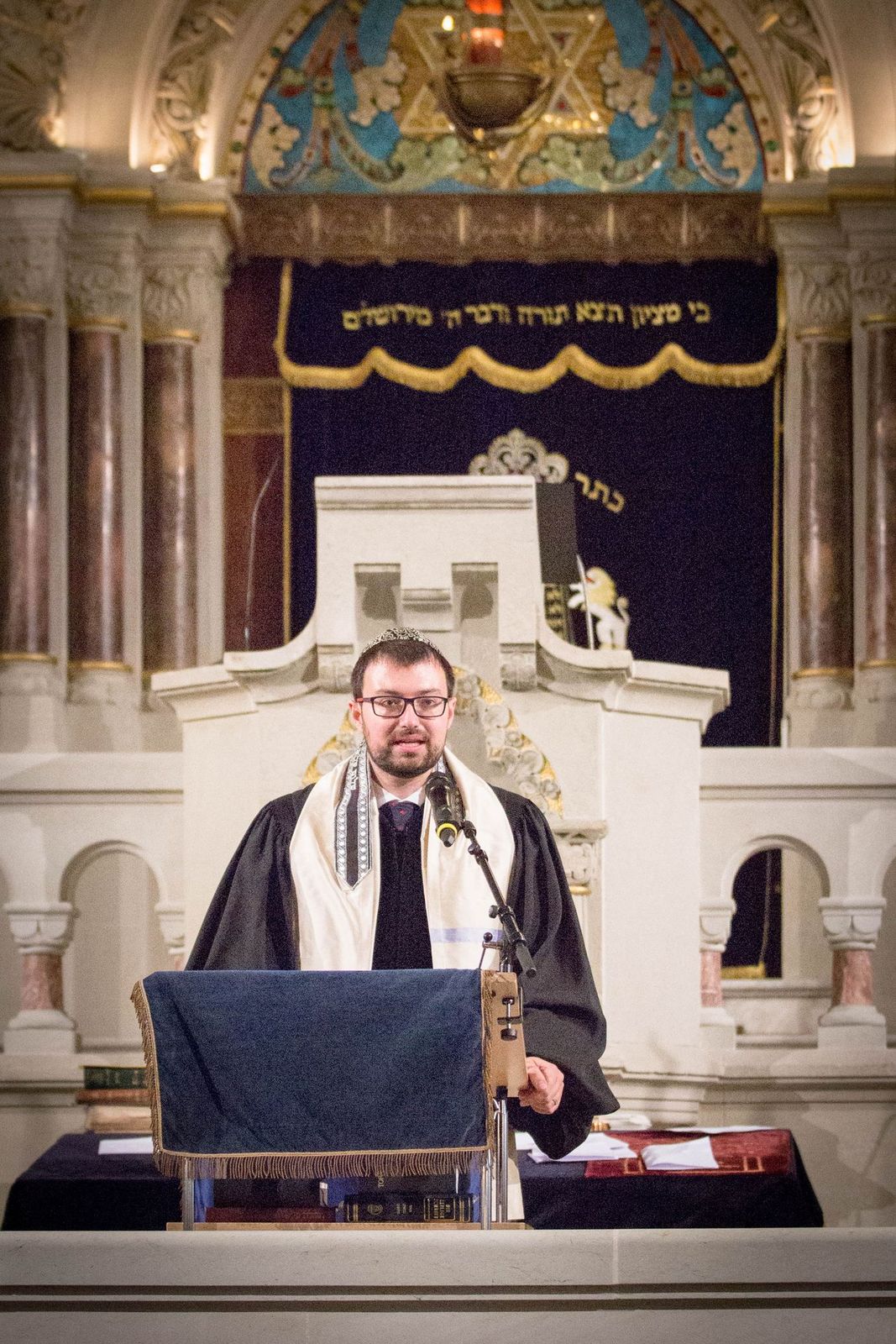 It was a turbulent week for Rabbi Maxa.  Just five days before the opening of the new synagogue, Rabbi David Maxa was officially ordained a rabbi in the festive Rykestrasse Synagogue in Berlin, together with other four rabbinic colleagues, two of them women, and one cantor.  Their ordination was a very special one as, due to the Covid-19 regulations, only a limited number of guests could attend in person.  For David Maxa, some of his relatives and friends managed to cross the borders literally at the eleventh hour, as the entry regulations suddenly tightened with Germany abruptly issuing restrictive provisions for visitors from Prague due to the pandemic spread.

Despite this fact, 20 people met at the celebration dinner, relatives, friends and members of all three communities, Prague, Liberec and Děčín. Two other rabbis Anita Kantor from Hungary and Isak Bård Kyrre Aasvestad from Norway were warmly invited to join as their relatives and friends could not make it to Germany due to the borders closure.  Many thanks to Jonathan Wootliff for organizing and hosting such a festive dinner.

We all know that the support of family and close friends is crucial.  Thus, it is important to mention David’s mother, Jaroslava Hannah Maxová, a former prima donna of the National Theatre, currently serving as a chazan in the Jewish Liberal Union community.  The community next to David, got a great rebbecin in Judita Bergmannová, who has been not only a great supporter of her husband, a very kind and open personality perhaps invisible to many from the outside, but also always available to all who needed her.  The cheerful laughter and babble of their one-year old son Rafael always reminds us that whenever children are present, there is a future in the community and society. 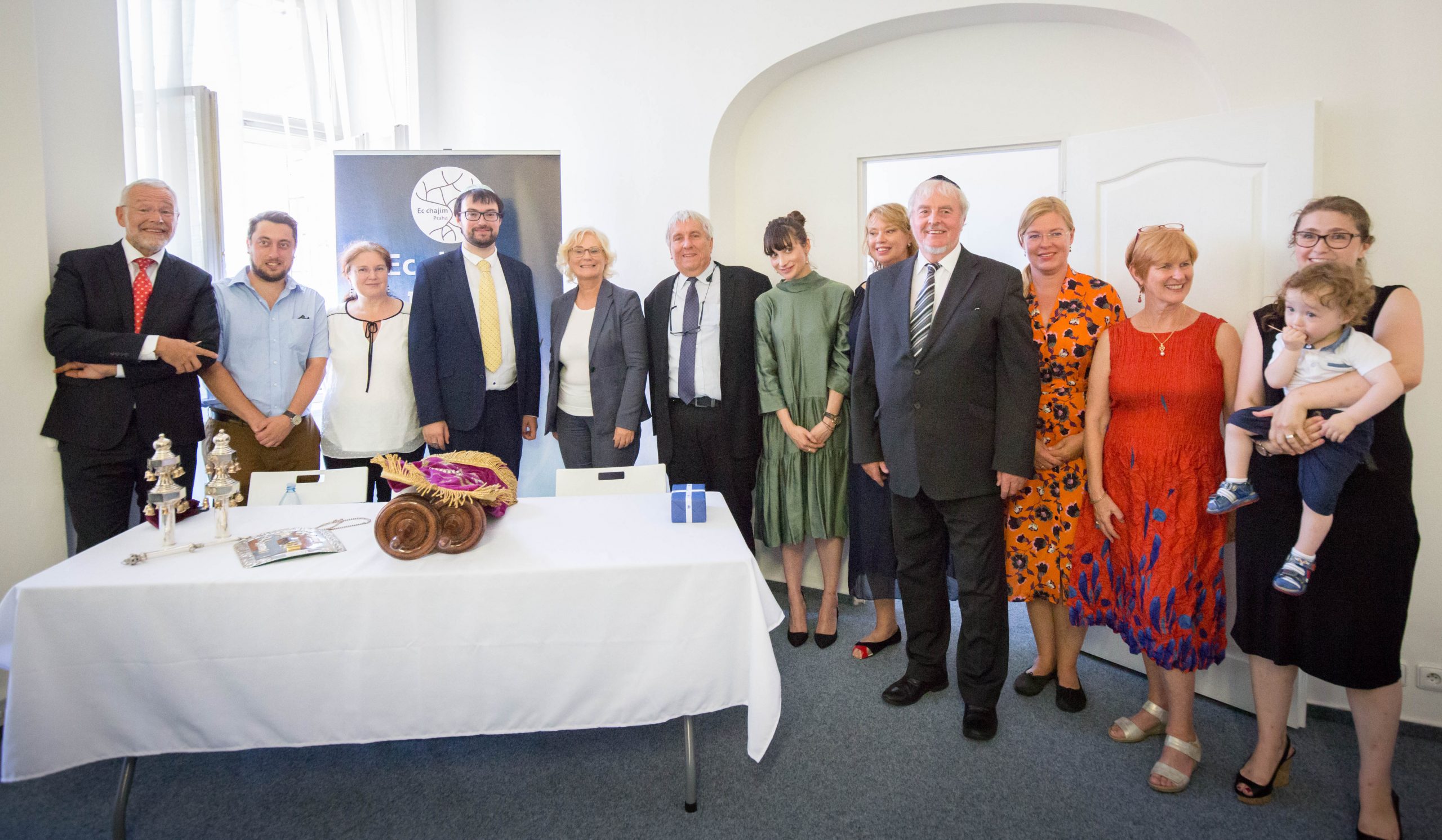 Politicians are given a three-month grace period after assuming their office.  How about a new rabbi starting his term under the challenging situation of the Covid-19 rules?

David’s ordination had to be postponed from June till September.  However, as a new leader, he was already guiding his community through the toughest Covid-19 lockdown lasting from mid-March until early May.  Regular Friday services and shabbat Havdala became moments when the community was physically distanced, but spiritually together in an unprecedented way.  This year unique Pesach Zoom Seder was attended by more than 80 families from all over the world.  The times of “socially distanced while together apart” brough much needed feelings of consolation, empowerment and togetherness.  Many foreign guests were invited for Havdala celebrations, despite the lockdown, the community got more even more exposure and connection then it would get under the “normal circumstances”.

The Holocaust Studies cooperation with the Charles University, remembrance of the National Roma Day, Interfaith dialogue activities and many other public appearances made Rabbi David Maxa a sought-after leader of the community and a great representative of Progressive Judaism outside the community.

One only wonders how he performs all these activities in addition to his regular rabbinic duties of leading shabbat dinners at various places, under the open sky, in a restaurant, on a boat, servicing bat mitzvahs and lecturing on Jewish ethics.

August 21 is a symbolic date for Czechoslovakia, as the Prague Spring Reform hopes were crushed by the invasion of Soviet tanks and the Warsaw Pact army in 1968.  On that very day, in the most widely read economic daily magazine, Hospodářské noviny, a two-page article presenting Rabbi David Maxa and his work in various communities appeared.  As there are no coincidences but only synchronicities could one wish for a more symbolic turning from the past to the future?

VISIT OF MRS. CHRISTINE LAMBRECHT, THE GERMAN MINISTRY OF JUSTICE

Imagine an August summer day in Prague.  In the newly established premises you can hear the wonderful voice of a former mezzosoprano prima donna of the National Theatre in Prague, and the current chazan of the Jewish Liberal Union Community, Hannah Jaroslava Maxová.

The Schehecheyanu tune was floating over the busy noise of traffic through open windows.

Prewar Czechoslovakia could be considered a highlight of the Czechoslovak Jewry.  Prague was home to a significant progressive community, represented by some of the most famous Czech-German Jewish writers such as Franz Werfel, Franz Kafka and Max Brod.  At that time, the cantors used to be former opera singers as a means to motivate the Jewish population to regular attendance of synagogues, according to Tomáš Kraus, the Executive Director of the Federation of Jewish Communities.  Prague was also important for the Zionist movement, as the city was hosting two Zionist Congresses and one was held in Karlovy Vary a decade later.  Unfortunately, this flourishing period was interrupted by the Holocaust and then communist regime.

WHO ELSE IS BEHIND THE COMMUNITY REVIVAL?

Ec Chajim as a non-profit organization, relies not only on its Rabbi, but also on many involved individuals.  Chairwoman, Anna Nosková, a mother of two, represents a new engaged professional woman.  Daniel Rux, the Executive Director, is responsible for both strategic as well as operational tasks of running the community in an organized, structured and safe manner.  Kateřina Weberová, a teacher at Lauder Schools and the Head of Education Section, explains the role of the community.  Judaism was in the past prevalent in families.  However, with the tradition interrupted and communities disappearing, today, in Central and Eastern Europe, it is not the family who bears the tradition but the community.  People come to us to learn how to discover their roots and their journey to Judaism. Therefore, Ec Chajim is offering various educational activities, from teaching Hebrew to teaching Judaism for various age groups.  Words of appreciation for cooperation need to be also extended to Dr. František Fendrych, Chairperson of the Jewish Liberal Union, Dr. Michal Hron, Chairperson of the Jewish Community of Liberec and Ing. František Comorek, Chairperson of the Jewish Community of Děčín.

David chose as his ordination motto, “Peace, peace, to those far and near, says the Eternal”. (Isaiah 57:19)

Together with wishes for a  good year, remember that now in Prague, Liberec and Děčín, the progressive Jews and supporters from all over the world have another home away from home and they all are invited to visit, once the situation allows.  We know that all of the activities mentioned above would not have been able without the support of number of individuals, donors and organizations. Toda raba, thank you and děkujeme!  We are grateful for the support and without it we would not be able to provide so many activities with such an outreach..  In particular, many thanks to Jonathan Wootliff, Jenny and Ryan Rassaby, H.E. Daniel Meron and Jill Meron, EUPJ and many others.

We wish a Good and Sweet Jewish Year 5781 to all our supporters, members and donors and may you be sealed for good in the Book of Life.