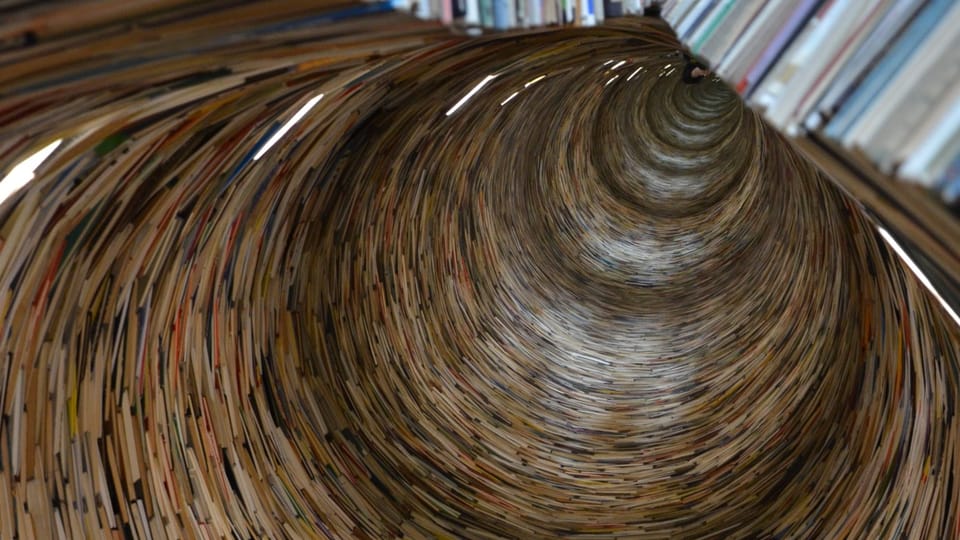 Since late December, long queues of people have been forming in front of the entrance to the city’s Municipal Library in the city centre. They haven’t come to borrow books, however, but to check out an artwork called Idiom, created by Slovak artist Matěj Krén. One of the thousands of tourists to visit the place in recent weeks is Craig from Canada:

“I do a lot of travelling and when I go to a new country, I do a Google search on top 10 things to see in that country and this came up as a destination to see. What I do then is I find it on a map and when I get to the country, I go and check it out. So I never saw it on an Instagram account and never saw a video of it, but when I got here, I took a video and photos and I of course posted it on my Instagram and TikTok account!”

The circular structure, known as Column of Knowledge, is made out of 8,000 books. When you look inside, mirrors installed within the column create an impression of an endless tunnel.

The artwork was installed in the lobby of the Municipal Library in 1998, when it reopened after a three-year renovation, but it has only now become such a sensation, after becoming a hit on social media, including TikTok, explains journalist Janek Rubeš:

“Kids that were in Prague looking into their phones suddenly saw a cool thing that they liked and they wanted to see it as well. And as it is in today’s world, everyone wants to have the same picture or same video, because it looks cool and they can get likes. So that’s why there is a big line of people taking the same picture.