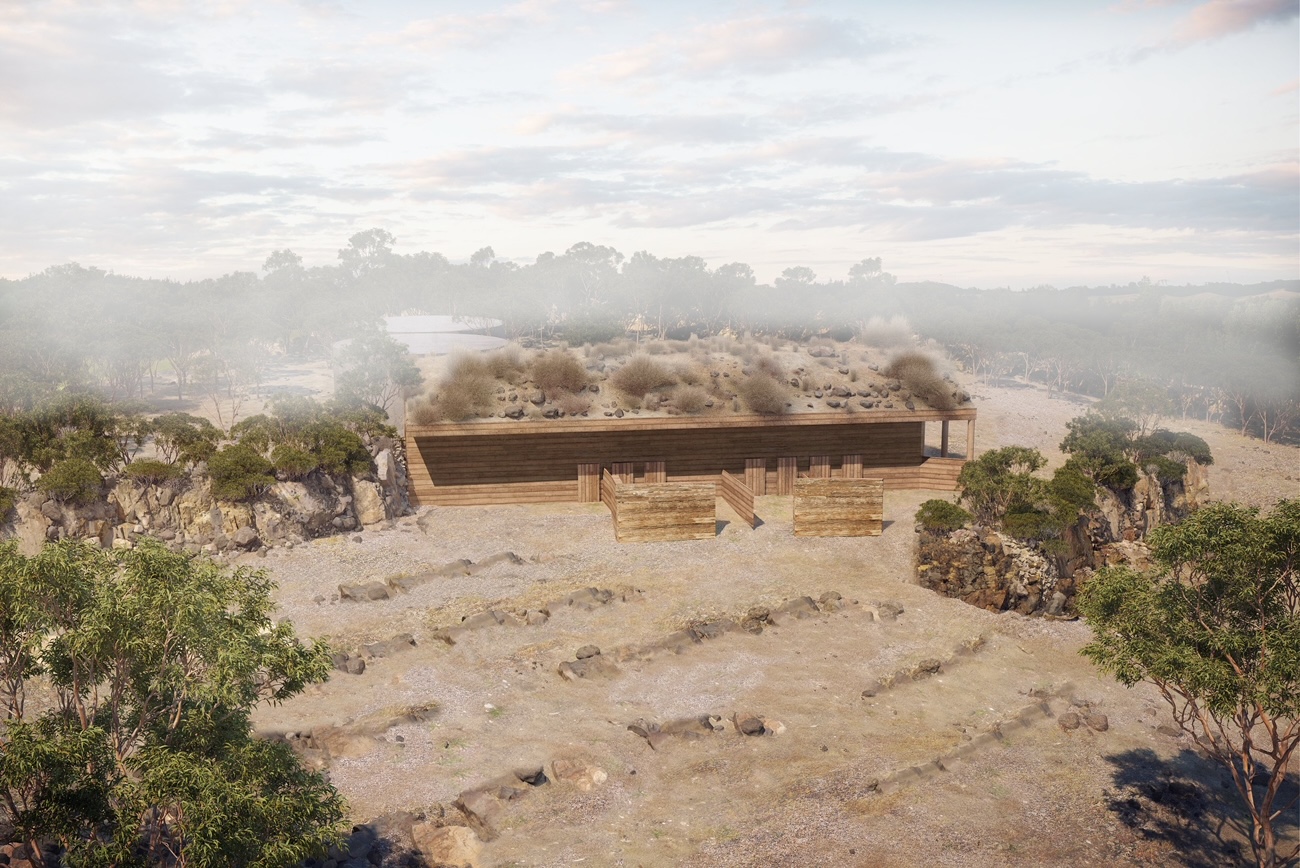 The visualization of the new design of the main enclosure and the background areas for Przewalski’s horses, which should evoke the environment of the Dzungar Gobi. Credit ABM Architekti

“Przewalski’s horses are iconic animals of Prague Zoo. Therefore, the transformation of the Plains starts with their stables and enclosures, which will be complemented by exhibits of other animals, for example Pallas’s cats or animal-legend olgoi-khorkhoi,” Director Miroslav Bobek outlined Prague Zoo’s plans.

The long-term project of reconstructing the Plains in the upper part of the zoo started by removing the original stables of Przewalski’s horses the year before last, the expansion of the water reservoir followed and last October the construction works on the exhibit complex for Przewalski’s horses began. After its completion reconstruction of other parts of the Plains will follow step by step ending with the Obora Kiosk. Following the completion rhinos will also return to Prague Zoo.

At Prague’s Dívčí hrady people can now see a six-headed herd of Przewalski’s horses, which now consists of the gelding Nepomuk and the mares Vereda, Xicara, Gruhne, Khamiina and Lana. The last two mentioned mares were for some time last year placed in the breeding station in Dolní Dobřejov and covered by the stallion Granola.

“We decided to breed the mares in Dolní Dobřejov gradually to prevent gravidity of all the mares coming at the same moment so that we would have enough time to properly place the foals born. We still don’t know if the mares Khamiina and Lana have conceived successfully, the possible nearest dates of birth would be at the turn of March and April,” explained Curator of ungulates Barbora Dobiášová.

Whether the possible descendants of Khamiina and Lana would be transported to the country of their ancestors, Mongolia, is of course still an open question. 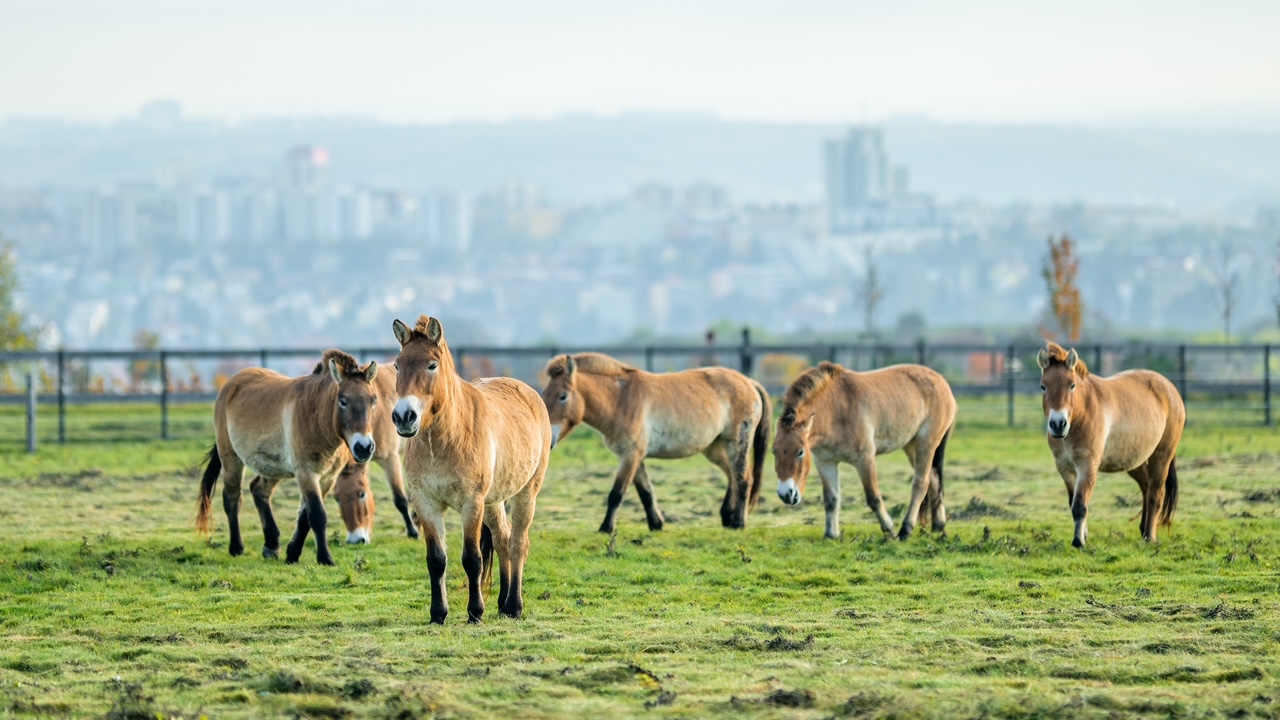 The newly put together six-headed herd of Pzewalski’s horses is grazing at Dívčí hrady. From the left the gelding Nepomuk and the mares Lana, Vereda, Khaamina, Xicara and Gruhne follow. Photo Petr Hamerník, Prague Zoo.

“Preparation of the new reintroduction project will take several years, but it is not impossible,” Miroslav Bobek says. “Now we have already selected the most suitable locality, which we will check together with our Mongolian colleagues in the winter conditions in the second half of January. Then we start planning construction of the acclimatization enclosures and premises for the staff.”

Nepomuk is a gelding, who at Dívčí hrady fulfils the role of a stallion. He was born in Slatiňany in May 2009, from there he came to Dolní Dobřejov one year later. Nepomuk was released at Dívčí hrady last year in March.

Vereda was born in Prague in May 2017. Her father is the stallion Len, who is a descendant of the mare Orlica III – the last Przewalski’s horse captured in the wild. Vereda was released at Dívčí hrady together with Nepomuk.

Gruhne comes from Belgian Reserve d’Animaux Sauvage, where she was born in July 2017 and from where she travelled to the breeding station of Prague Zoo in Dolní Dobřejov two years later. The mare Gruhne was released in April 2021 together with Xicara, Lana and Khamiina.

Xicara was born directly in Prague Zoo in July 2018. She was released at Dívčí hrady in April 2021.

Lana was born on 1st August 2016 in Germany’s Kölner Zoo. She was released at Dívčí hrady in April 2021, but one year later she was together with the mare Khamiina moved to the Breeding and Acclimatization Station in Dolní Dobřejov to get a chance to conceive after being covered by the seven-year-old stallion Granola. She returned to Dívčí hrady last September together with the mare Khamiina.

Khamiina comes from Berlin’s Tierpark, where she was born in September 2017. Together with Lana they returned to Dívčí hrady last autumn after being covered by the stallion, where they may both have foals at the beginning of this year.

Thirteen-year-old gelding Nepomuk (in the front of the photo) is guarding the mares and he is adequately dominant; therefore he fulfils the needed role of a stallion in the herd. Photo Petr Hamerník, Prague Zoo.

You can support the project Return of the Wild Horses by transfer of any amount to the collection account We Help Them to Survive (č. ú.: 43–680 466 0247/0100) or by buying souvenirs at the e-shop of Prague Zoo at the section called We Help Them to Survive: https://eshop.zoopraha.cz/suvenyry/pomahame-jim-prezit.html. And last but not least of course also by visiting Prague Zoo.