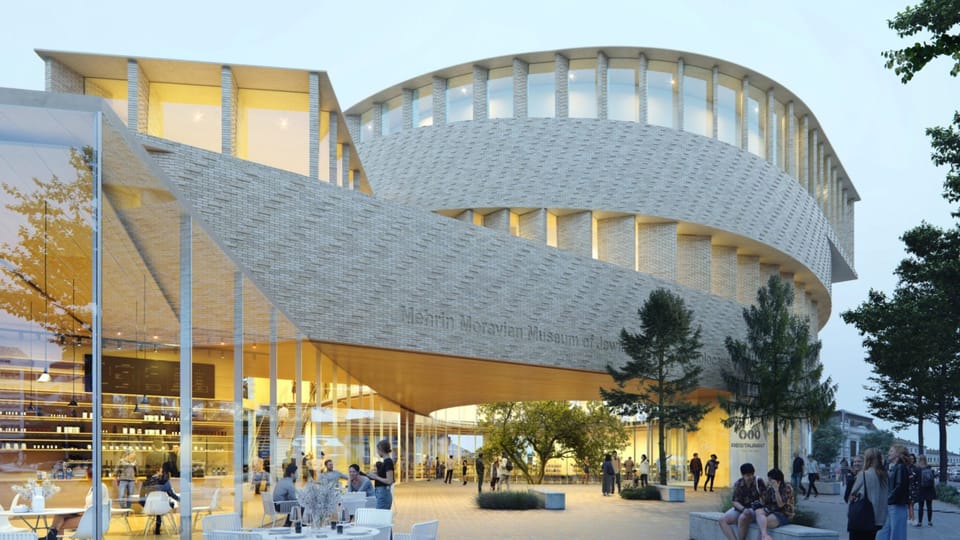 The renowned Japanese architect Kengo Kuma has won an international competition for the design of a new Jewish Museum in the Moravian city of Brno. The striking building in the shape of a seemingly endless white ribbon with a tree in the centre was selected by an international jury, presided by the famous Czech architect Josef Pleskot:

Four world-known architecture studios, including the Dutch studio MVRDV, took part in the competition for the construction of the Moravian Jewish Museum Mehrin, which was announced in February this year.

The winning design by the famous Japanese architect Kengo Kuma was selected unanimously by a nine-member international jury. The striking modern building should be located in city centre, on what is currently a parking lot between the city’s bus and train stations.

Besides its original design, the jury praised the winning entry for fitting in with the surroundings, says head of the jury Josef Pleskot:

“The building is in the shape of an endless ribbon that gradually rises from the sidewalk. At the centre of the building is a beautiful library and in the heart of that is a garden with a tree, which has a certain symbolic meaning.”

One of the people behind the idea to build a brand new museum dedicated to the history of Moravian Jews is the Brno-based writer and publisher Martin Reiner, who currently heads the endowment fund for its construction:

“One of my friends, the historian Michal Konečný, came up with the idea to combine a socially serious topic with brand new architecture. I myself adopted the idea in the spring of 2019 and since then I have been working hard to make it come true.”

What is the aim of the project? In what way is it going to be different from other Jewish Museums in the Czech Republic?

“We want to establish it as an important and needed institution that would map the life of the Jewish community in Moravia but we also want to construct a brand new building that would accommodate the institution.

“We don’t want to create an old-fashioned kind of museum that is filled with stuffed animals, or in this case, with dozens of menorahs.

“We want to make a statement that will reach visitors on an emotional level. We want to present powerful, touching life-stories with the help of 21st century technology. That’s the difference.”