THE BREAKTHROUGH YEAR 2022 IN PRAGUE ZOO 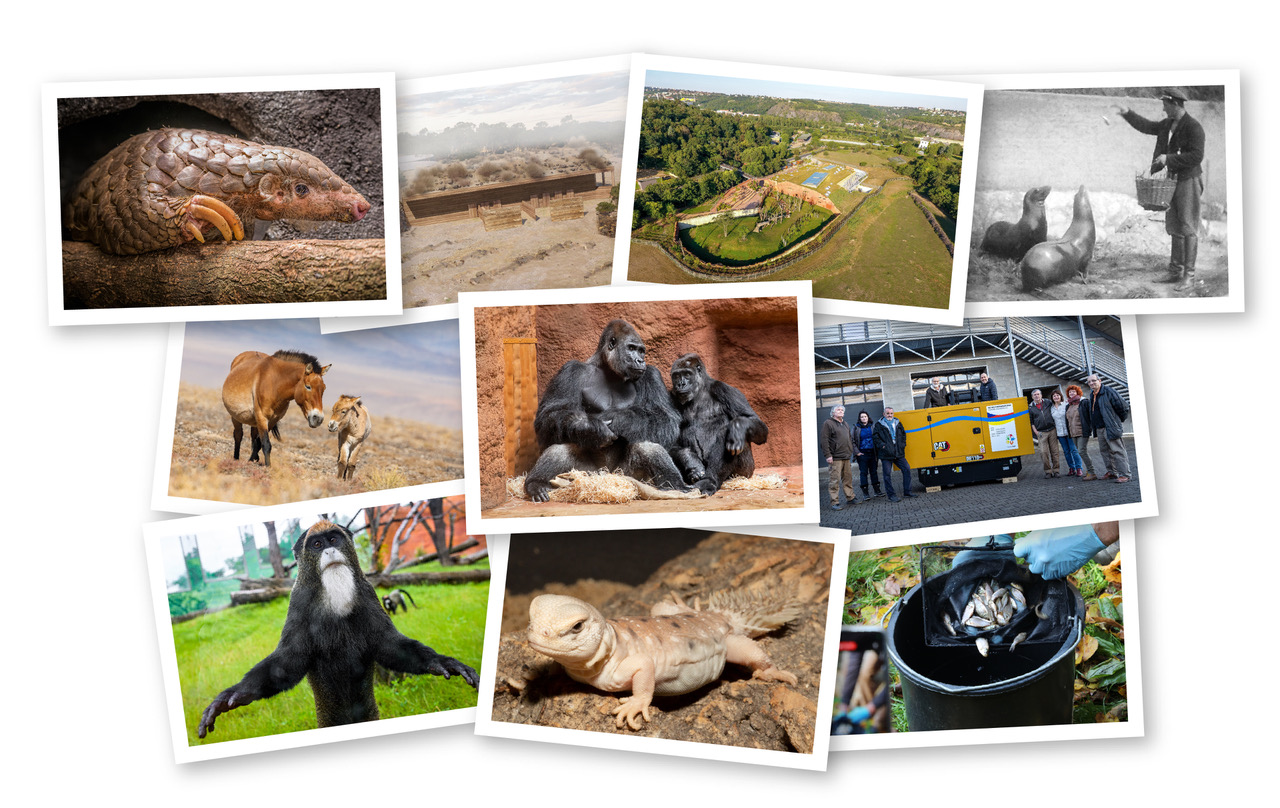 After two “COVID” years Prague Zoo returned to normal in 2022. Despite the lower number of foreign visitors and the deteriorating economic situation a high number of visitors returned: in 2022 a total of 1,419,122 visitors passed through its gates. In a way it was a breakthrough year in both a positive sense (the Dja Reserve opening) and a negative sense (especially the increase in energy prices).

After almost three years of construction, the Dja Reserve was opened in Prague Zoo – a generously designed house for gorillas and other representatives of fauna of the Congo Basin. The Dja Reserve is to a large extent inspired by a biosphere reserve of the same name, which is in central Cameroon and where the Prague Zoo’s education and awareness raising project Wandering Bus takes place. Its central part is planted with numerous plants which evoke tropical rain forest, and the atmosphere is enhanced by surround sound. Other additions to the house are, for example, a school classroom brought from Cameroon, or a tent of the reserve rangers equipped with replicas was well as with many original artifacts. Prague Dja Reserve has gained great responses from both visitors and international experts.

The aerial photograph of the Dja Reserve shows very clearly how sensitively this exposition complex is incorporated into the landscape. Photo: Miroslav Bobek, Prague Zoo

The decision to keep Richard and his two sons Kiburi and Nuru in the old gorilla house made creating a new breeding group in the Dja Reserve possible. The Coordinator of the European Ex-situ Programme for gorillas suggested to add to the three “Prague” females – Kijivu, Shinda and Kamba – and the young male Ajabu, a new leading male, and another female, with the provision that two females in such a created group will be allowed to reproduce. He recommended to bring Kisumu, the male who had until now lived in Austrian Schmiding, and Duni, the female from Cabárceno, the daughter of famous gorilla Moja, to Prague. This recommendation exceeded all our expectations: Moja’s story can continue in Prague thanks to her daughter.

Kisumu and Duni in the Dja Reserve shortly after they were connected. Photo: Miroslav Bobek, Prague Zoo

#3 OTHER INHABITANTS OF THE DJA RESERVE

Although the Dja Reserve is by force of habit referred to as the new gorilla house, it actually presents eleven species of vertebrates and eight species of invertebrates. For the very first time visitors to Prague Zoo can see here straw-coloured fruit bats or some representatives of invertebrates, for example the red-legged golden orb-web spider or horrid king assassin bug. Other species already appeared in Prague Zoo, albeit a long time ago. An example can be the very attractive de Brazza’s monkey, which was shortly kept in 1954 and in 1968 – 1969. Other mammal species of the Dja Reserve are bread traditionally; they were located in different parts of the zoo. These are eastern black-and-white colobuses, which now share the exhibit with the western lowland gorillas, northern talapoins, red river hogs, African brush-tailed porcupines and Gambian pouched rats.

A female of de Brazza’s monkey in the enclosure in the Dja Reserve. Photo: Petr Hamerník, Prague Zoo

450 mammals were born, and 475 birds and 318 reptiles and amphibians hatched during the year 2022 in Prague Zoo. Altogether these comprised 218 species of the abovementioned four groups of vertebrates; in case of the reptiles the breeders achieved a record of forty reproduced species. The aardvark female and the triplets of maned wolf have probably gained the highest popularity among visitors. Media were very interested in the hatching of the Asian leaf turtles – a species, which Prague Zoo received before it was scientifically described, and which reproduces in the Indonesian Jungle house without human intervention. From the breeding point of view the reproduction of the Chinese goral, long-nosed potoroo, Cabot’s tragopan, Salvadori’s fig parrot and princely mastigure are considered the most valuable.

The young of the princely mastigure are the first breeding of this species within EAZA. Photo: Tereza Mrhálková, Prague Zoo

#5 THE BEGINNING OF PANGOLIN BREEDING

A couple of Chinese pangolins, the male Guo Bao and the female Run Hou Tang, arrived at Prague Zoo from Taipei Zoo in April 2022. So, Prague Zoo became one of the only two zoos in the world where these scaly mammals can be seen. Pangolins deserve the attention of the public not only because of their exceptionality, but principally because they are the most illegally traded mammals of the world. After all, Prague Zoo is involved in their protection both in Asia and Africa. The arrival of the pair of pangolins was preceded by a great deal of demanding preparations, including a complete rebuilding of the night exhibit in Indonesian Jungle. After more than half a year it seems that we have managed taking care of these extremely demanding animals and that the first European pangolin baby might be born right in Prague.

#6 REBUILDING OF THE PLAINS

After a water reservoir was expanded in the south-east part of the so-called Plains, the new construction of stables and enclosures for Przewalski’s horses has started. It will be complemented by an exhibit of Pallas’s cats and “olgoj chorchoj”. It presents the first phase of transformation of the entire Plains, which will be dedicated exclusively to Asian fauna. So, Prague Zoo will return to breeding rhinos, among other, about which visitors often ask. Besides the works on the Plains (and of course finishing the Dja Reserve) a lot of smaller construction works and, last but not least, the preparation for construction of the Arctic exhibit complex were undertaken. It will be intended especially for polar bears, whose breeding Prague Zoo would have to terminate without the construction of a new breeding facility. In the ideal situation the construction of the Arctic could start at the end of 2023.

The visualization of the new design of the main enclosure and the background areas for Przewalski’s horses, which should evoke the environment of the Dzungar Gobi. Credit: ABM Architekti

#7 GREAT GRANDCHILDREN OF OUR PRZEWALSKI’S HORSES IN GOBI

Between 2011 and 2019 nine air transports of Przewalski’s horses to western Mongolia were realized. The tenth one did not take place due to COVID – and the great news is that it may even not be needed. Thirty mares transported from Prague to Great Gobi A Strictly Protected Area have not only had eighty foals so far, but have also had eleven grandchildren and even the first great grandchildren. The total number of Przewalski’s horses in this reserve has reached the sufficient number of more than four hundred individuals. However, the activities of Prague Zoo in Mongolia do not end here. Its employees in cooperation with local colleagues are preparing a brand new Przewalski’s horses reintroduction project in eastern Mongolia. Currently the best locality has already been selected.

#8 WE ARE SAVING CRUCIAN CARP

Prague Zoo continues to implement or support many projects on biodiversity conservation on five continents, but it is also engaged in conservation of the fauna of Czech Republic. One of the species it has been focusing on since 2021 is crucian carp, once a common and typical fish of our waters. It reached the brink of extinction due to changes in water management and spreading of invasive Prussian carp. After the methodology to find last remaining crucian carps of Elbe genetic lineage was developed in cooperation of the Biology Centre of the Czech Academy of Sciences and the Czech University of Life Sciences, the carps were moved to four tanks at the premises of Prague Zoo. The first breeding success came in 2022, therefore in October the first 99 reproduced fish could be released into a pond in Vinoř.

Releasing the crucian carps bred in the premises of Prague Zoo into the pond in Vinoř. Photo: Miroslav Bobek, Prague Zoo

Immediately after the Russian invasion of Ukraine Prague Zoo announced fund-raising collection to help Ukrainian zoological gardens and, in cooperation with its Polish partners from the European Association of Zoos and Aquaria, it started to send via Poland feed and equipment to Ukraine. Financial support to selected Ukrainian zoos followed and at the end of the year a powerful diesel generator was purchased for Mykolaiv Zoo. By December 29, 2,756 contributions totalling 5,263,352 CZK have been made to the Ukrainian collection. So far 4,076,896 CZK has been spent out of this sum for the abovementioned help. Another form of help was a symbolic entrance fee of 1 CZK for women and children fleeing the war; this event lasted from February 28 until April 30.

#10 A LOOK AT THE FIRST YEARS OF PRAGUE ZOO

In Vienna’s Österreichisches Filmmuseum the local curator of the amateur film collection started examining 13 reals of 9.5-millimetre films. It was discovered that part of them depict Prague Zoo during the early days of its existence, specifically the period between 1935 – 1937. It is an extremely valuable material, all the more so because the substantial part of the Prague Zoo archive was destroyed by the floods in 2002. The discovered films portray Professor Jiří Janda with his wife, his assistant Dr V. J. Staněk, many keepers and of course a lot of animals, both famous and completely forgotten ones. Unfortunately, we have not yet been successful in discovering the identity of the author of these amateur films, we only know that he was most likely a lieutenant colonel of the Czechoslovak Army.

The films, taken by a so far unknown amateur, capture also the feeding the sea lions Batul and Hýta, donated to Prague Zoo by Vlasta Burian. Credit: Österreichisches Filmmuseum

We thank all who help Prague Zoo as well as those who visit it and appreciate it!