The Historical Match of Karel Poborský 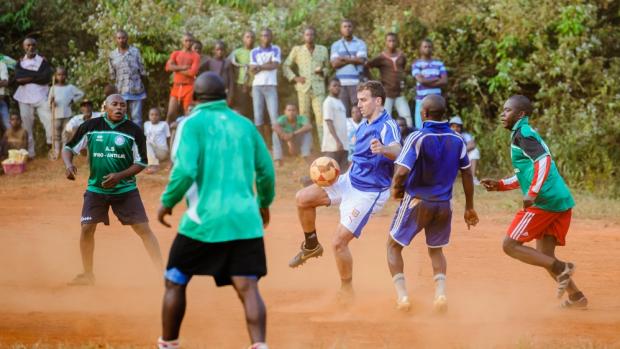 Ten years ago, Karel Poborský played a football match which none of its participants or spectators will ever forget. This match took place in the remote Cameroonian town of Somalomo; Karel played the first half for the Deux-Zéro Team and the second half for Lycée de Somalomo. And it was this match which launched our project Wandering Bus in January 2013.

It probably would not had been possible without Karel. When we announced in Somalomo our intention to guide the local pupils toward nature conservation and organize trips for them with the Wandering Bus, we were turned down. The distrust of whites there was deep and not without reason. I was thinking how to overcome it and I decided to address Karel Poborský. This was how he became the patron of the Wandering Bus and his popularity worked incredibly well. The Wandering Bus got a green light and the male part of population of Somalomo and its surroundings started intense football trainings in anticipation of Karel’s arrival.

The first trip of the Wandering Bus ten years ago led to the distant town of Limbe. Children and representatives of the parents, the teacher and the reserve guards, who participated in it, were excited. School children, none of whom had ever left Somalomo before, were immediately amazed by a tarmac road (they thought that the bus went out of the forest roads on a water surface) or by multi-storey buildings. But the peak experience was meeting the gorillas in Limbe. The children and adults saw them alive for the first time in their life, and not only as a meat on their plates.