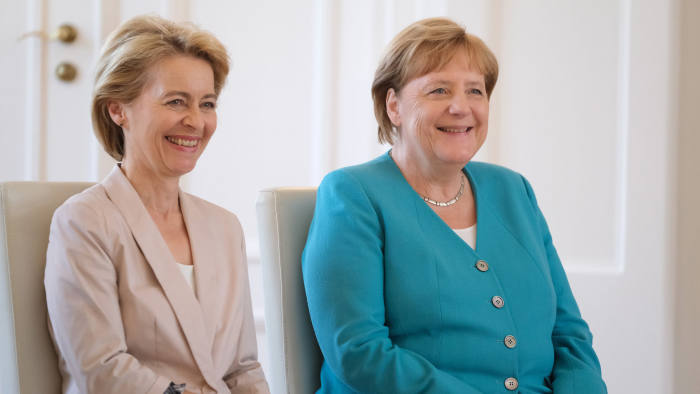 Despite Merkel, the cards are stacked against female managers finding success.

Frederike Probert’s job probably only exists because of the lowly place of women in German business. The former tech entrepreneur organises networking for female professionals because they are too busy trying to be ideal mothers when they are not in their male-dominated offices.

The cause of gender equality in German business received a boost last week when Jennifer Morgan was appointed co-chief executive of SAP, Europe’s largest software company. But in becoming the first woman to head a DAX30 business, the American was more the exception than the norm.

A survey carried out by professional services firm EY this year found only 8.7 per cent of senior managers in Germany’s 160 listed companies were women. As of this month, just four publicly-quoted companies in Europe’s biggest economy had a female chief executive prior to Ms Morgan’s appointment — DIC Asset, Hamburger Hafen und Logistik and GrenkeLeasing, and most recently, Thyssenkrupp.

At this rate, according to EY, it would take until 2048 for a third of management roles to be occupied by women.

“I wanted to do something to stop wasting time and bring successful women together to empower each other,” says Ms Probert, whose Hamburg-based Mission Female has 45 members spread across Germany’s biggest cities and in Zurich. “If you are a woman at executive level, you are often the only one, which means you are fighting for yourself, in a pool of men.” Rabenmutter, or “raven mother”, is a derogatory term for anyone deemed a neglectful mother in Germany.

“There is a medieval expectation that German women have to be this perfect stereotype who can deliver on every front outside the workplace,” says Xenia zu Hohenlohe, who juggles Considerate Hoteliers, her environmental consultancy, with bringing up two children.

This situation may seem surprising for a country that is led by the world’s most influential female political leader, chancellor Angela Merkel, and which next month installs Ursula von der Leyen, a mother of seven, in the top EU job as European Commission president.

The disparity stems largely from a conservative corporate culture and society.

Vuyiswa M’Cwabeni recalls being ad¬vised to dress differently shortly after starting work in Germany. The Zimbabwean-born Canadian bought the “boring grey suit and blue shoes” advised by her male boss, and her career took off, eventually landing her the role of chief technology and innovation strategist at SAP. Although Ms M’Cwabeni now dresses to her own taste, “traditional role models are still strong”, says Markus Heinen, head of people advisory services at EY for Germany, Switzerland and Austria.

This discourages men from taking up parental leave or other domestic chores, which adds to the pressures on working mothers who already face criticism for not staying at home. “With many companies arguing that “female candidates often don’t have the necessary management experience to qualify for senior posts”, Mr Heinen says “there is clearly a need to do more internally to prepare women for managerial roles”.

Until they do, German companies will fail to reap the benefits of improved performance associated with diversity of thought at the top.

Iris Plöger, an executive board member at the BDI, the main business lobby group, argues that German companies increasingly “understand that it’s valu¬able to have different views, leadership styles and approaches to problem-solving”. Yet she maintains that “it is more effective when companies come to this realisation themselves, rather than being obliged by law to change.”

The government says the introduction of quotas in 2015 for supervisory boards led to much of the belated progress. As a re¬sult, women now fill 34 per cent of supervisory board seats at all big listed German companies, up from 22.1 per cent in 2015. However, those are non-executive roles, overseeing separate man¬agement boards.

When asked to set a target for increasing female representation on those management boards, some 70 per cent of companies covered by the law set it at “zero”, according to the government. Franziska Giffey, family minister, last month announced plans for “sanctions”, expected to be fines, for companies that give a zero target with no explanation.

But even if there were no resistance to change from business, working mothers would still face the double whammy of unhelpful taxation and education systems. “You can have as many quotas as you want but if the state education system won’t comply”, progress will be stymied by a short school day, and a paucity of crèches, says Ms zu Hohenlohe. For many children, the school day often ends at lunchtime. Crèches are few and far between outside Berlin and the former Communist East Germany — where mothers typically worked.

Another problem is the “splitting the difference” tax system that penalises most working couples, especially mothers. “The partner with the lower income — and that’s usually the wife — ends up paying a higher marginal rate of tax than if she were taxed on an individual basis, because her income is tallied up with that of her partner,” says Katharina Wrohlich, head of gender economics at the DIW think-tank.

Austria, Sweden and Italy abolished a similar system in the 1970s but in Germany “there is no majority for reform” of a feature incorrectly perceived as a bonus for married couples, says Ms Wrohlich. The fact the gap in spousal income often occurs after a woman takes time off to have children helps explain why international organisations such as the OECD have “for years been complaining that the German tax system disadvantages . . . married women with children”.

For Julia Bellabarba, a couples therapist in Berlin, the real problem is that German society has “no script for being either a good-enough mother or a good-enough father”. “What I observe is that the mother works hard at her career, has a child, gets stressed trying to be a perfect mother, then tries to recruit her partner to be a perfect father, and the battles over parenting just escalate.”

We had an interview with Leyla Boulton in our magazine. Click here to read it.