“Each country has its own historical traditions” 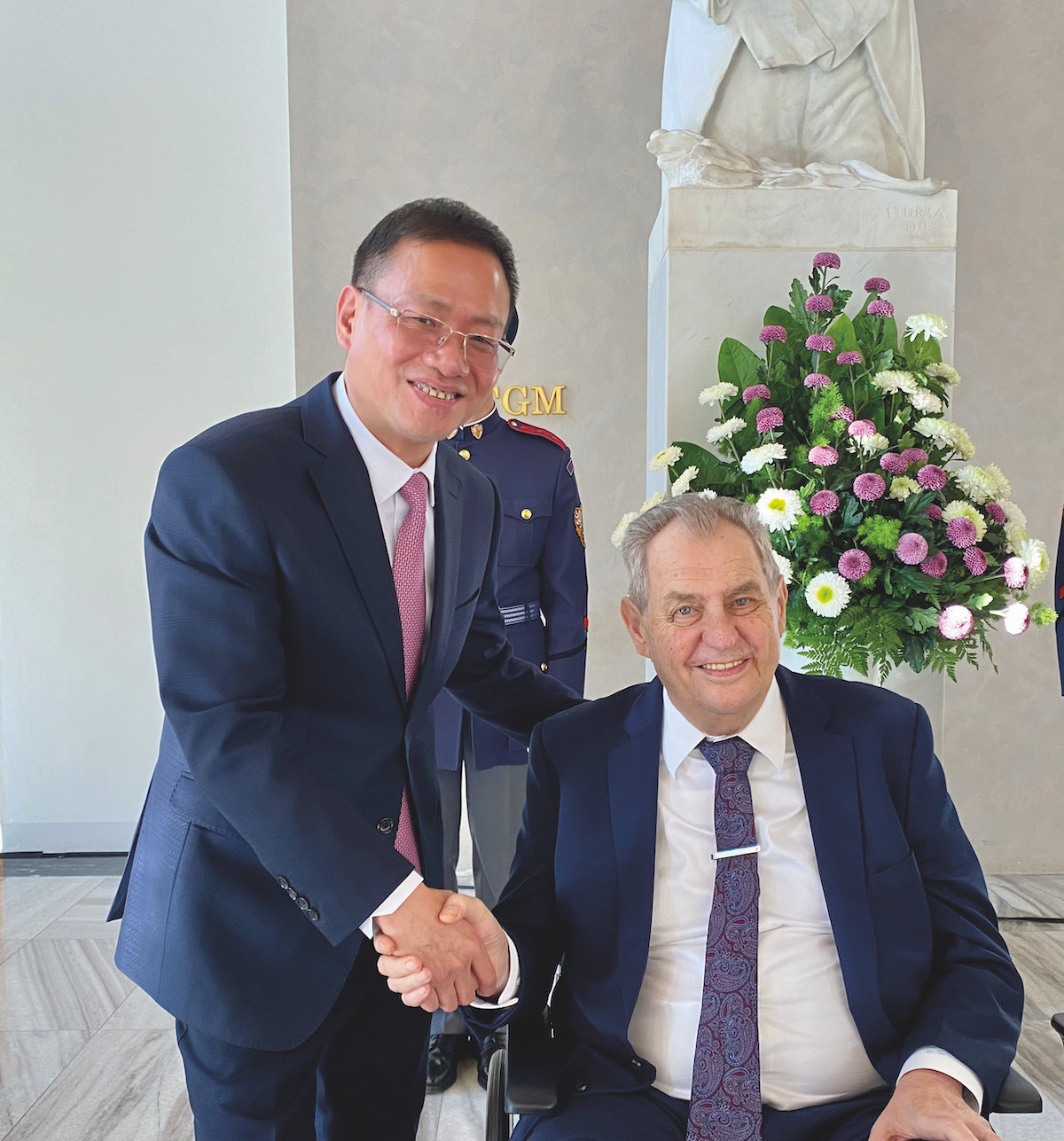 “China has a history that includes a million years of humanity, 10,000 years of culture, and more than 5,000 years of civilization”, proudly says the new Chinese Ambassador in the Czech Republic, Mr. Feng Biao, and continues: “It is important to seek common ground while shelving differences, and to achieve harmony without uniformity.” How is the new Ambassador feeling in Czechia? What does he say about the relationship between the two countries? And how does he see the relationship between his country and the world?

Mr. Ambassador, you arrived in the Czech Republic on 14th October this year. Before, you worked in Chinese embassies in Syria, Egypt, and Sudan. What were your first impressions of our country?

Thank you for asking this question. It is a great honour for me to be the new Chinese Ambassador to this beautiful country. Actually, I feel at home here. First of all, my hometown is in the south of the Yangtze River of China, which has a similar climate and environment to that of the Czech Republic, with beautiful scenery, frequent rain, and moist air.

Secondly, both our countries have time-honoured cultural traditions and good aspirations for the prosperity and development of human civilization. Our two countries have rich cultural resources for exchange, and can work together to promote dialogue and mutual learning among civilizations.

What do you consider the most difficult part of being an ambassador?

As the title itself suggests, an ambassador is a representative from one country to the other in order to promote friendship and ties between the two countries and peoples. The most difficult thing about being an ambassador is having the way of thinking needed to deal with problems and resolve conflicts. Each and every country and nation has its own historical traditions, cultural heritage, basic national conditions, and ways of thinking. It is important to seek common ground while shelving differences, and to achieve harmony without uniformity in order to bring people closer to each other. During my tenure, I will do my best to consolidate mutual political trust, expand economic cooperation and trade, and strengthen people-to-people exchanges between China and the Czech Republic. I will make unremitting efforts to promote the steady and long- term development of the China-Czechia strategic partnership, improve the well-being of our people, achieve common development, and write a new chapter of China-Czechia friendship.

China is a large country that has a lot to offer to travellers. Can you introduce the natural and cultural heritage of your motherland, please?

Thank you for your interest in my motherland. As one of the countries with the longest history in the world, China has a history that includes a million years of humanity, 10,000 years of culture, and more than 5,000 years of civilization, and the Chinese civilization is the only civilization in human history that has lasted for over 5,000 years without interruption. For a long time, the Chinese civilization has exchanged knowledge with other civilizations and learned from each other, contributing to the world with profound systems of thought, rich achievements in science, technology, culture and art, and unique institutional creations. As a matter of fact, the Chinese civilization has profoundly affected the progress of world civilization. Today, China has a rich and profound cultural heritage, with 518 items in the first batch of the national list of intangible cultural heritage, and 42 items recognized as UNESCO intangible cultural heritage. Chinese literature, calligraphy, music, drama, tea ceremonies, porcelain, etc. have a unique sense of beauty, and reflect the peaceful, optimistic, and open traits of the Chinese people.

As you said, China is a vast country, and covers an area of over 9.6 million square kilometres. It has a beautiful landscape, with 318 national 5A-rated scenic spots and 45 national tourist resorts. By July 2021, the total number of China‘s world heritage sites had reached 56, among which 38 are cultural sites, 14 are natural sites, and 4 are mixed sites, including the Great Wall and the Forbidden City of Beijing. Different regions in China have various scenes and customs, and China’s regional cultures are diverse and colourful.

Moreover, China has enjoyed a rich food culture since ancient times, which emphasizes the seasonality, appearance, meaning and nutrition of food. The renowned Eight Cuisines of China are Anhui, Guangdong, Fujian, Hunan, Jiangsu, Shandong, Sichuan, and Zhejiang. These cuisines have distinctive culinary styles, and I believe our Czech friends will find their favourites among them.

With this interview, I would like to extend a warm welcome to our Czech friends to visit China, and experience a real and wonderful China.

Thank you for this really nice overview of the enjoyable features that are part of the colourful country of China. Now, can you describe the current status of Czech-Chinese relations?

This is an important question. The Czech Republic was one of the first countries to recognize the People‘s Republic of China. This year marks the 73rd anniversary of the establishment of diplomatic relations, and the 6th anniversary of the establishment of a strategic partnership between China and the Czech Republic. History shows that friendly cooperation has always been the mainstream of China-Czechia relations, and mutual benefit and win-win results are the foundation of bilateral cooperation. In particular, since the Czech Republic joined the Cooperation between China and Central and Eastern European Countries (the China-CEEC Cooperation) in 2012, the China-Czechia practical cooperation has continued to reach new levels.

China attaches great importance to the development of its relations with the Czech Republic, regards the Czech Republic as an important cooperative partner, and firmly believes that maintaining and growing a sound relationship between China and the Czech Republic best serves the common interests of the two countries and two peoples. For some time now, a small group of people in the Czech Republic, out of ideological prejudice and other reasons, have been interfering in China‘s internal affairs, undermining China‘s interests and causing adverse impacts. It should be pointed out that this group of people are incapable of preventing the people of the two countries from further developing friendly relations, let alone blocking China‘s development and progress. China stands ready to work with the Czech side, on the basis of the principles of mutual respect, equal treatment, and mutual benefits, to strengthen friendly cooperation in various fields, promote the sustained, sound, and steady development of bilateral relations, and create more benefits for the people of both countries.

The waiting time for a new electric car in Czechia has now exceeded one year. Since China is a leader in the field of new energy vehicles, I would like to ask when we would be able to find them, and especially the BYD SUV atto 3, on sale here.

This is a very interesting question. Thank you. In recent years, China has been making great efforts in developing a new energy vehicle (NEV) industry, and has more than 70 NEV brands. Now, there are around 600,000 NEV-related enterprises operating in China. In 2021, the output of new energy vehicles in China reached 3.545 million units, with a year-on-year growth of 159.5%. The sales volume was 3.521 million with a year-on-year growth of 157.6%, ranking the first in the world for seven consecutive years. The Chinese NEV industry strives to innovate technology, reduce costs, optimize services, and improve their brand image, and is rewarded with an increasing reputation in the global markets. In 2021, China exported 310,000 new energy vehicles with a year-on-year increase of nearly three times, accounting for one third of the world’s export volume and making China the largest NEV exporter in the world. From 2021 to 2026, China’s production and sale of new energy vehicles are projected to grow at an average annual rate of over 40%.

At present, there are several Chinese NEV brands selling in the Czech Republic. SAIC MG is one of them, and the sales volume of SAIC MG has been nearly 300 units in 2022. Some other brands are actively exploring the Czech market at the moment. I hope Czech customers could have the opportunity to buy the BYD atto 3 and other models from local dealers in the near future, and we look forward to more and more trade and investment cooperation between China and the Czech Republic in the field of new energy vehicles. 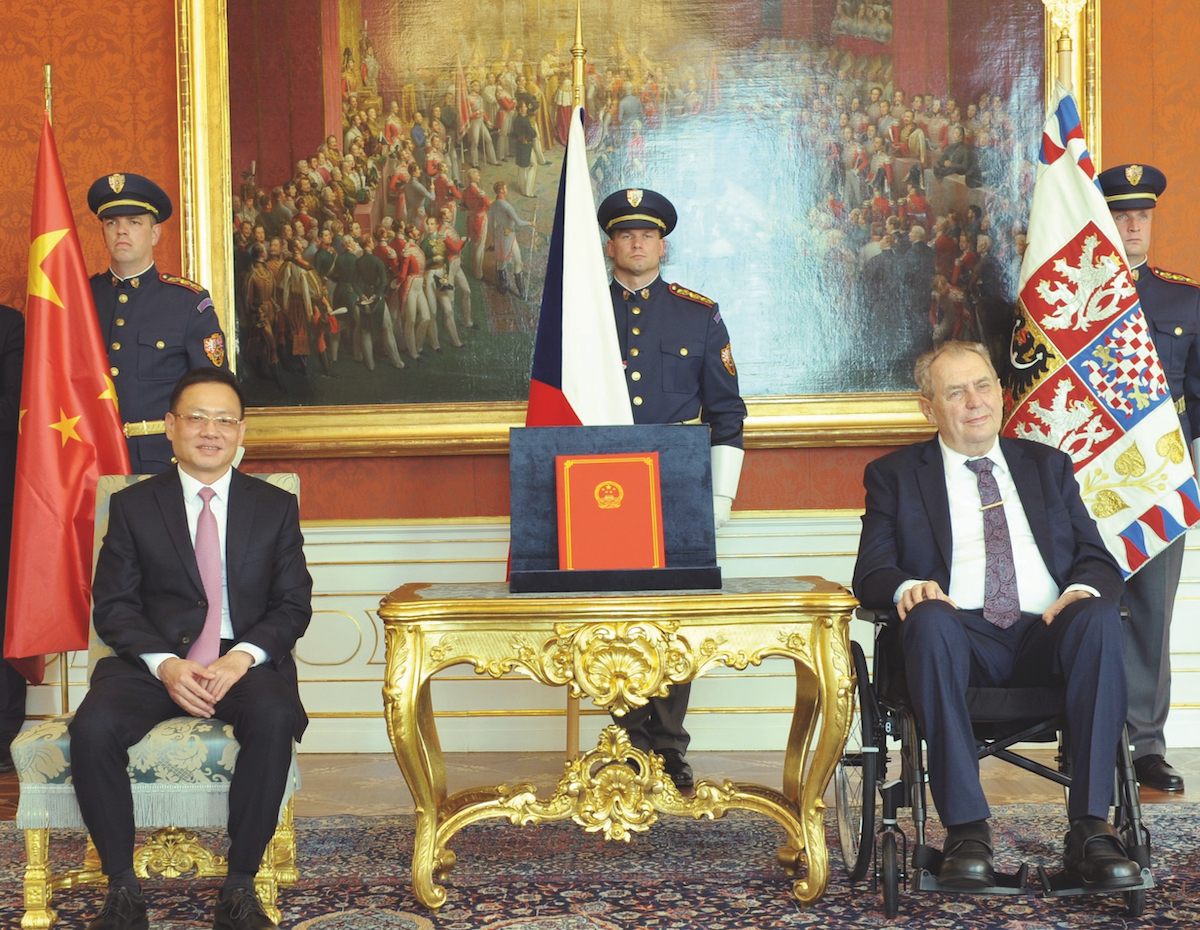 This interview is given on the occasion of the National Day of China. What wishes do you have for your motherland, and for the Czech Republic?

In the 73 years since the founding of the People‘s Republic of China on 1st October, 1949, and especially in the over 40 years of reform and opening up, China has made impressive achievements in development, and both its comprehensive national power and the living standard of the Chinese people have improved significantly. We have completed the historical task of eradicating absolute poverty and finishing building a moderately prosperous society in all respects, and have embarked on a new journey toward building a modern socialist country in all respects. In 2021, China‘s GDP reached 114 trillion yuan (approximately CZK 376 trillion) and accounted for 18.5% of the world economy. China has firmly remained the world’s second-largest economy. It has entered the ranking of the most innovative countries of the world, with the second highest nationwide R&D spending and the largest cohort of R&D personnel in the world, and has achieved major successes on multiple fronts, including manned spaceflight and Moon and Mars exploration. China has built the world‘s largest education, social security, and healthcare systems, and is recognized as one of the safest countries. The average life expectancy of the Chinese people has risen to 78.2 years.

Just as China cannot develop in isolation from the world, the world needs China for its development. In 2021, the total value of China‘s trade in goods and services grew to US$6.9 trillion, the stock of its investment in foreign countries exceeded US$2.6 trillion, and the cumulative foreign direct investment in China exceeded US$2.6 trillion. From 2017 to 2021, China ranked second in the world in attracting foreign investment for four consecutive years, and its outbound investment flows were among the top three in the world. China has become a major trading partner for over 140 countries, and has contributed up to 38.6% on average to and has become the main engine for world economic growth. We‘ll be steadfast in deepening reform and opening up across the board, as well as in pursuing high-quality development, and will create many more opportunities for the world through China’s own development.

I would like to take this opportunity to wish for my great motherland to be strong and prosperous, for my compatriots to be happy and healthy, and for the early realization of the Chinese dream of the great rejuvenation of the Chinese nation. Meanwhile, I sincerely wish the Czech Republic peace and prosperity, and a brighter future for China-Czechia relations.